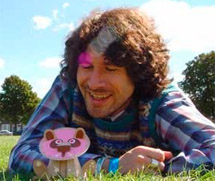 According to a press release, Separado! follows Gruff’s journey through the Welsh community in Patagonia in search of a long-lost relative who happened to be a 1970s Argentine pop star (who sang in Welsh). In an insightful piece in the Guardian, we learn that in the film, Rhys plays music for a gathering of senior citizens while wearing a red Power Rangers-style helmet. According to the Guardian, there is also “a dance sequence on a Welsh beach” and “a color-saturated shot of Rhys jumping over a fence to escape an angry armadillo.”

The movie premieres November 19 at the Soundtrack Film Festival in Cardiff, Wales.